Docker Apps and Images for everyone

Wait, What is Docker?

Have you ever worried about software running in your machine but not in other systems? Docker is the solution. Docker sandboxes applications running within as containers so that their execution is completely isolated from others. This has become enormously popular over the last few years, but to capitalize on it, you need to integrate third-party images.

What is a Container Image?

A Docker container image is a standalone bundle of executable packages and software to run an application. An image is a dormant and immutable file with a set of layers that essentially acts as a snapshot of a container. Docker’s public registry is usually your central source for container apps.

A container is an efficient little environment that encapsulates up code and all its dependencies so the application runs quickly and reliably from one computing environment to another. In simple words, an instance of an image is called a container. Container images become containers only from their runtime on Docker Engine.

Portainer is a management UI that enables you to manage your different Docker environments (Docker hosts or Swarm clusters). Portainer is easy to deploy and has a surprisingly intuitive user interface for how functional it is. It has one container which will run on any Docker engine (whether it’s deployed as a Linux container or a Windows native container). Portainer allows you to control all of your Docker resources (containers, images, volumes, networks, etc.) it is compatible with both the standalone Docker engine and with Docker Swarm mode. 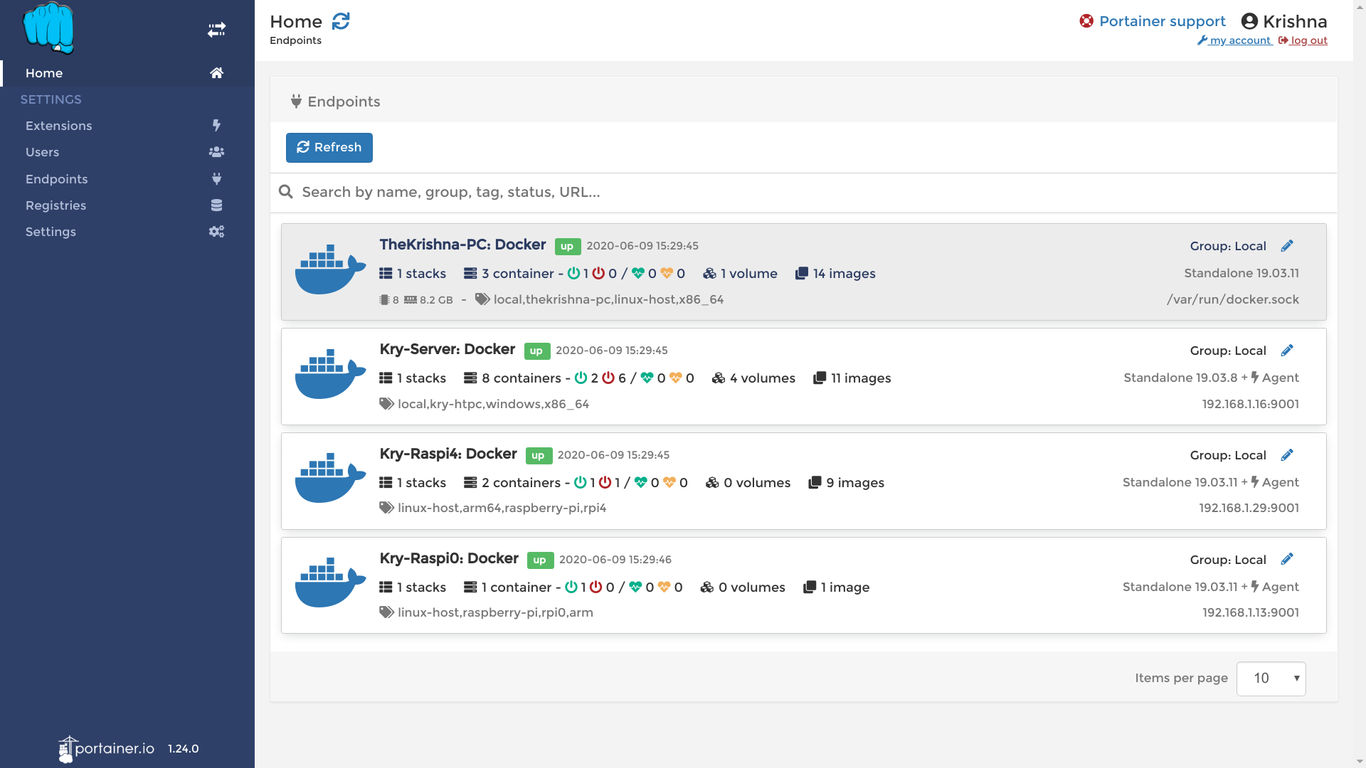 Pi-hole is a must-have for everyone whether you’re a hardcore gamer, developer, or just couch potato. It is a Linux network-level advertisement and tracker blocker that acts as a DNS sinkhole (supplies systems looking for DNS information with false returns). It is designed for single-board computers with network capability, such as the Raspberry Pi. Even If your router does not support changing the DNS server, you can use Pi-hole’s built-in DHCP server. The optional web interface dashboard allows you to view stats, change settings, and configure your Pi-hole. Unlike traditional advertisement blockers where only a user’s browser ads are removed, this functions similarly to a network firewall. This means that advertisements and tracking domains are blocked for all devices behind it. Since it acts as a network-wide DNS resolver, it can even block advertisements in unconventional places, such as smart TVs and mobile advertisements.

Why do I love it?

The Tensorflow Docker image is based on Ubuntu and comes preinstalled with python3, python-pip, a Jupyter Notebook Server, and other standard python packages. Within the container, you can start a python terminal session or use Jupyter Notebooks and use packages like PyTorch, TensorFlow.

For those who want to use a GPU, Docker is the easiest way to enable GPU support on Linux since only the NVIDIA GPU driver is required on the host machine. For CUDA support, make sure you have installed the NVIDIA driver and Docker 19.03+ for your Linux distribution. For more information on CUDA support on Docker, visit NVIDIA Container Toolkit 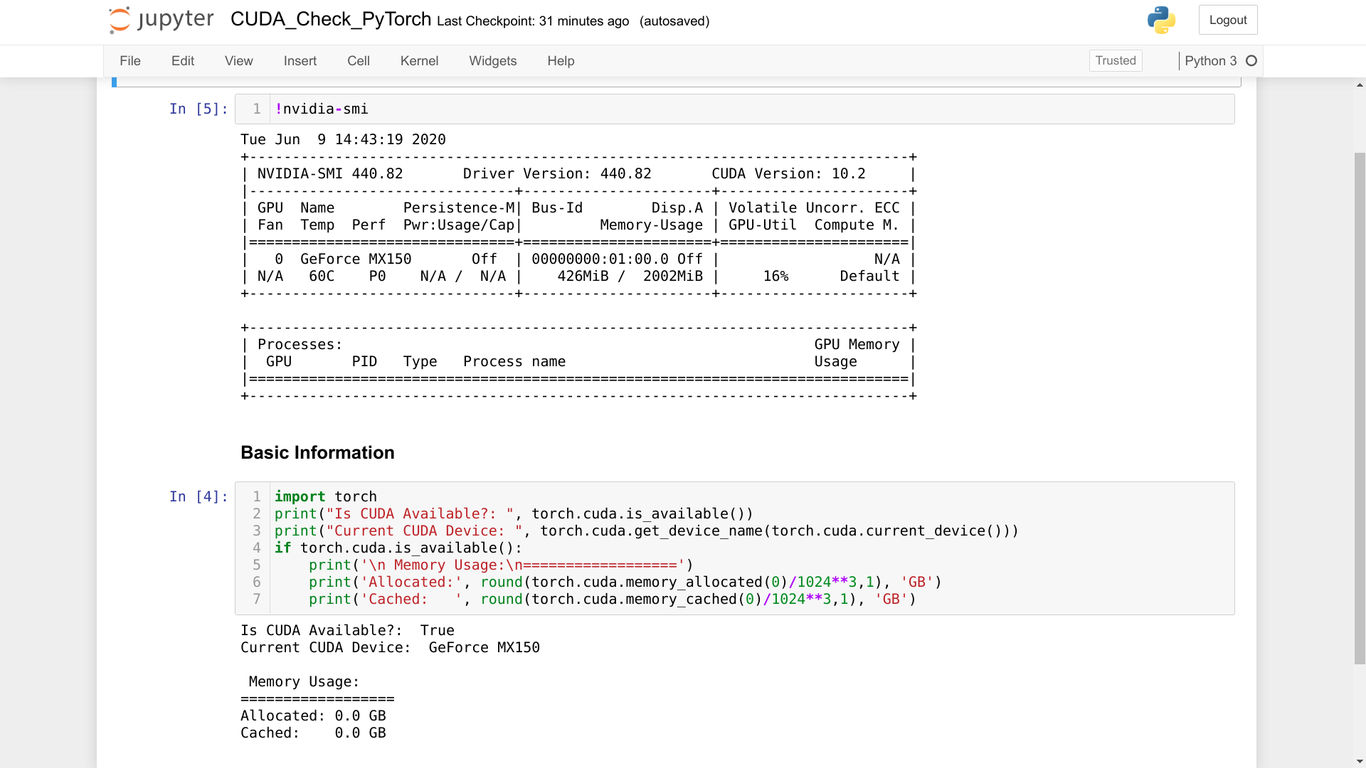 As you can see above, I’m using a 10.2 CUDA driver for my GeForce MX150 with a total GDDR5 memory of 2GB. Although it’s an entry-level graphics card, it’s at least 450% faster than my CPU (i5-8520U), which makes training your machine learning models much quicker.

Why I prefer it over platforms like Google Colab?

In my opinion, CoCalc is definitely one of the underrated Jupyter notebook servers out there. Although it is intended for computational mathematics, it is essentially Jupyter notebooks on steroids. Your notebook adventure is enhanced with real-time synchronization for collaboration and a history recorder. Additionally, there is also a full LaTeX editor, Terminal with support for Multiple Panes, and much more. 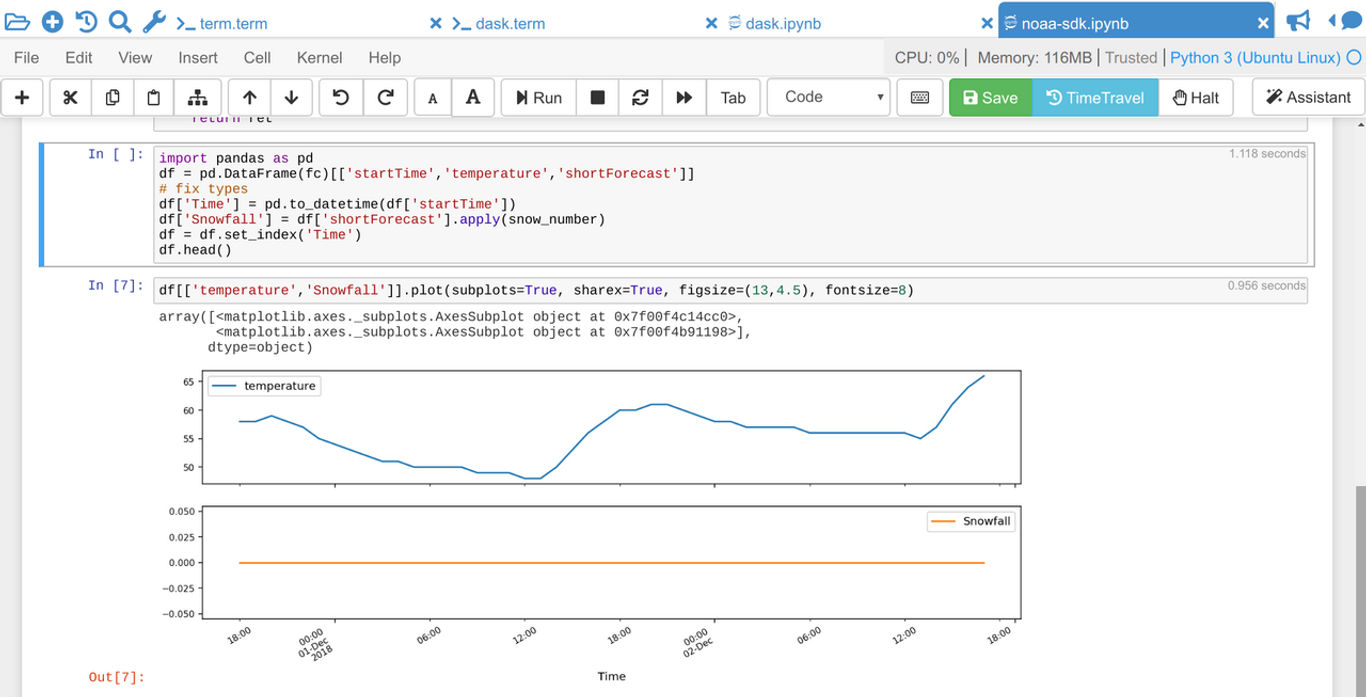 Wait, what’s a base image?

A base image (not to be confused with parent image) is the parent-less image that your image is fundamentally based on. It is created using a Dockerfile with the FROM scratch directive. Docker image must include an entire root filesystem and the core OS installation, so choosing the right base image essentially determines factors such as the size of your container image, packages it inherits.

If you’ve built Docker images, you know Alpine Linux. Alpine Linux is a Linux distro mostly built around musl libc (a standard library intended for OSes based on the Linux kernel) and BusyBox (provides several Unix utilities). The image is just around 5 MB in size and even has access to a package repository, which is much more complete than any other BusyBox based images while being super light. This is why I love Alpine Linux, and I use it for services and even production applications. As you can look below, the image comes with only 18 Packages and has a lower memory utilization than ubuntu. The image comes with a apk package manager.

Ubuntu is undoubtedly the most popular Linux distro and exceptionally known for its accessibility and compatibility. It is a Debian-based Linux distro that runs on practically everything (from the desktop to the cloud, to all your IoTs). The ubuntu tag points to the “latest LTS” image as that’s the version prescribed for general use. As you can see below, the image comes with only 89 Packages and has an apt package manager.

MySQL is undoubtedly the most popular open-source database. Execute the below commands to deploy two containers for MySQL and PHPMyAdmin. They’ll leave the port 3306 in the host to accept SQL connections and port 8080 in the host for PHPMyAdmin. You can also optionally install SSL certificates to secure your connections when taking it public. MySQL is better suited for applications that use structured data and require multi-row transactions. As of June 2020, there are about 546,533 questions on just StackOverflow compared to it’s NoSQL on-par which has only 131,429 questions.

MongoDB is an open-source document-oriented database that is on many modern-day web applications. MongoDB stores it’s data in JSON like files. I personally like MongoDB as its load balancing feature enables Horizontal scaling while explicitly removing the need of a Database Administrator. It is best suited for applications that require High write loads even if your data is unstructured and complex, or if you can’t pre-define your schema.

Grafana is an open-source standalone tool mainly for visualizing and analyzing metrics while supporting integration with various databases (InfluxDB, AWS, MySQL, PostgreSQL, and more). Grafana supports built-in alerts to the end-users (even email you) from version 4.0. It also provides a platform to use multiple query editors based on the database and its query syntax. It is better suited for applications for identifying data patterns and monitoring real-time metrics.

Dashboard for monitoring resources on my Raspberry Pi 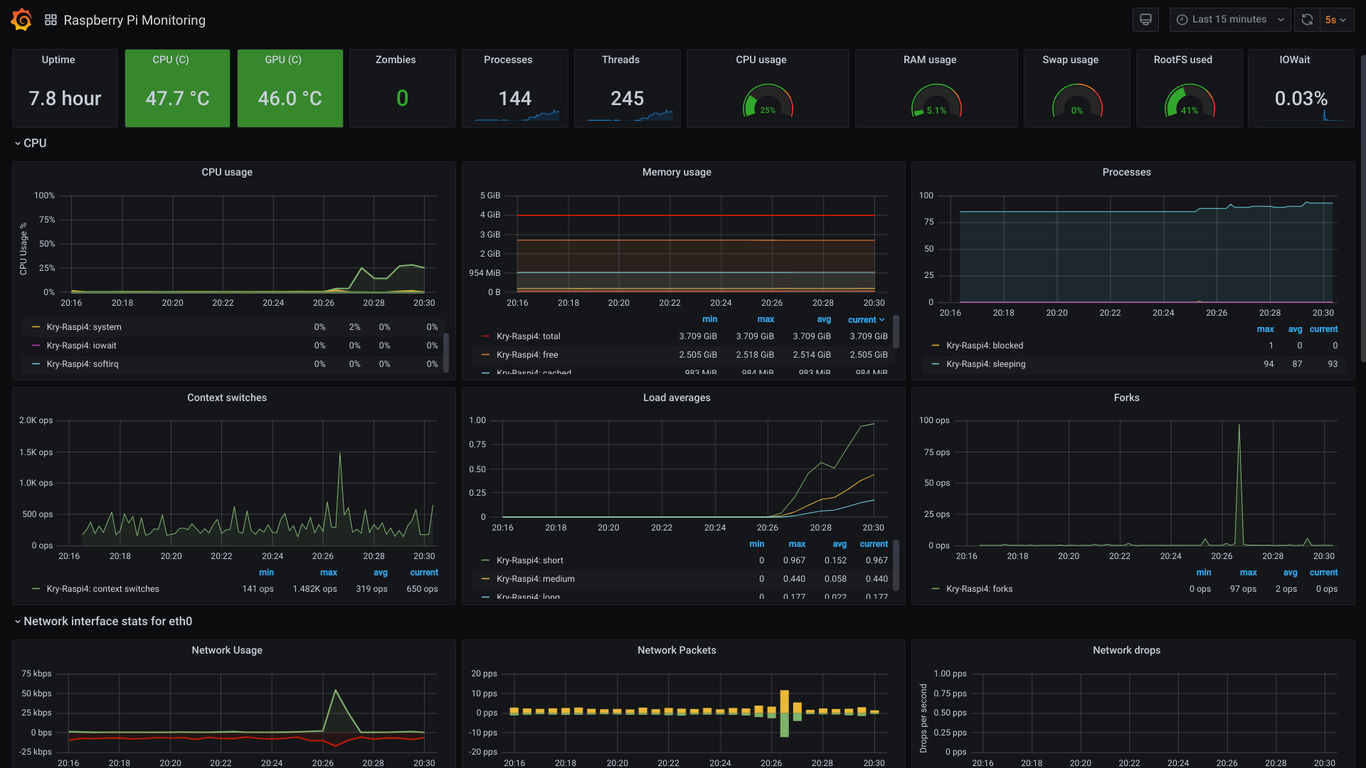 Nginx is more than just a lightweight web server as it comes with a reverse proxy, load balancer, mail proxy, and HTTP cache. I prefer Nginx to Apache as it uses lesser resources and quickly serves static content while being easy to scale. Compared to Apache, I’ve experienced Nginx to stutter less under load.

Nginx addresses the concurrency problems that nearly all web applications face at scale by using an asynchronous, non-blocking, event-driven connection handling algorithm. The software load balancing feature enables both Horizontal and Vertical Scaling, thus cutting down server load and request-server time. You can use the Nginx Docker containers to either host multiple websites or scale-out by load balancing using Docker swarm.